When Will The Blues Leave?

by The Bone Orchestra 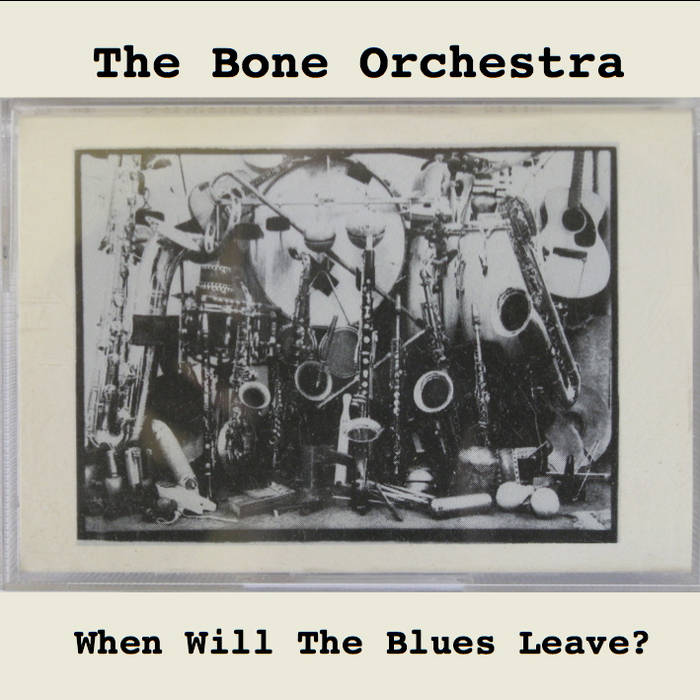 In 1986 the Sheffield music scene was moving away from the experimentation of previous years and wherever you looked electronic pop & post-industrial funk prevailed. Charlie Collins (Clock DVA, The Box) had something completely different in mind. He enlisted Infanti, Saw & Jasnoch from Bass Tone Trap & Hornweb, Todd from The Box & Fisch from Workforce and started rehearsing. Once he'd got a handful of off-kilter, rattling acoustic musical slabs he presented them to Hope who'd spent his time since the demise of The Box turning out a batch of leftfield recordings with the likes of Richard H. Kirk, David Harrow & Chain, not to mention the Avant-Garde Musique Concrete Classic 'Dry Hip Rotation' with Jono Podmore! Always up for a new challenge Hope was soon stretching his tonsils and creating dark and twisted stories befitting of the time to compliment odd time signatures and the stunning array of instruments.

There was nothing around to compare The Bone Orchestra to; truly original, at odds, ahead of their time, out of sync. Their sporadic live performance were a joy to behold (the classic Leadmill 'clash' still fondly remembered by a packed house of Sheffield's music community). Mark Flunder (Television Personalities / Cee Bee Beaumont) released 'When Will The Blues Leave?' on cassette through his proudly Independent Frank label in late 1987 capturing the first incarnation of the band. By this point Al Fisch had been replaced by Jo Cammack (Hula) for percussion and backing vocals. Further changes would ensue over the following year but The Bone Orchestra template was set, there would be no compromise in their wonderfully idiosyncratic and singular vision.
25 years later... has the world caught up? Sure enough the same socio-political question is still just as pertinent "When Will The Blues Leave?"
>>> Drop The Guillotine On A Wealthy Head <<<