Within The Beyond (Aqui & I Reira) 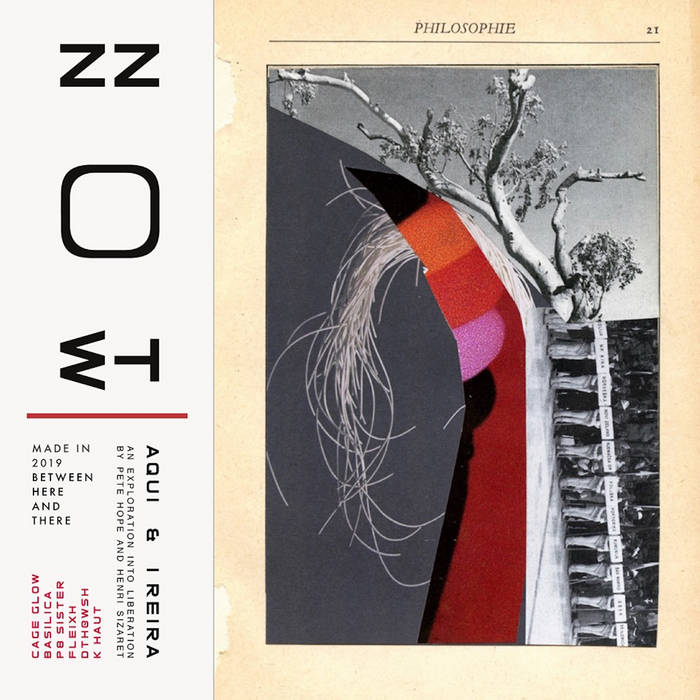 Originally released on Cassette Only by The Tapeworm as 'Within The Beyond' the-tapeworm.bandcamp.com/album/within-the-beyond

In search of creative liberty the pair adopt spontaneous composition techniques in the construction of their other-worldly voodoo machinations, resulting in a wild ride through caustically sharp electronic mutations, intriguingly tarnished with the disturbed spirits of mangled blues and depersonalised dada vocal proclamations.”

To discover what lies beyond any planned form we must trust intuition, experience and the immediacy of improvisation. whilst ever there is a safety net, or any number of safety nets, commitment to the moment cannot be complete. Once it is established that the creative spirit can be invoked by the simple mantra of ‘I believe’ all that stands in the way of replicating the formula is to doubt or force that belief. Keep the rules simple. Do not second guess. Only discard that which will poison. Embrace spontaneity and its unexpected inventions. If NOT NOW, when?

On the surface, NOT NOW does not sound like an invitation. Quite the contrary. It feels like a rejection. That is of course, if you don’t scratch the surface. Because only those who do not question remain in a blissful ignorance. They are feeble and cowards. And perhaps it is fine. But we chose otherwise. We chose substance. We dig further. And fast.

NOT NOW is about the sense of immediacy, this evanescent spark of inspiration we get when we see, hear or feel things. Anything. It has to do with the release of dopamine and hormones in our bodies that trigger pleasure, pain, happiness and sadness. It is a liberation.

Here, no plan, no order. Just an immediate sensation. You can chose to caress it wherever you are. Or dump it. And we are in Portugal and New Zealand. We are Aqui & I reira. We exchange ideas, carve fast. We are not on the same spot, but we are here, in the same place. Connected by the audio waves we share.

Not Now is a duo of Richard H. Kirk collaborator and Sufferhead member Peter Hope (vocals / electronics) and Henri Sizaret (computer-generated electronics). The six tracks included on Within The Beyond are punishing, edgy, techno-inflected cuts, like music for the final club night of the apocalypse, most likely at Berghain.

On opening track ‘Cage Glow’, Hope’s chanted vocals are delivered with pure demonic menace, supported by an architecture of intense, thunderous beats that sound like they were fashioned from the sounds of the printing press pushing out the flyers for the aforementioned end-of-days all-nighter. ‘P8 Sister’ prowls forth on a seductive bassline, its refrain of “Go, primate” carrying a sinister, cryptic quality, while the erratic ‘Fleixh’ sounds like its remixing itself randomly through a broken algorithm, a brief flash of techstep rhythm providing some semblance of stability toward the end. Easy listening for speeding paranoiacs.

Industrial techno maverick Pete Hope, the pioneer behind Sheffield’s legendary 1980s electronic explorers The Box, abolishes the boundaries once again with this fervent manifestation of his talents, connecting his artistic machinations with those of French avant-garde electronic precisionist Henri Sizaret, who goes by the moniker AkA Muzik.

Hope’s forthcoming release on cassette-tape only label The Tapeworm pushes the industrial techno envelope into uncharted territories, while Sizaret pushes ahead into new formations of sonic improvisation.

Despite residing in separate geographical latitudes and longitudes, with Sizaret located in Portugal and Hope residing in New Zealand. Even though they are not in the same spot, they most certainly are in the same place creatively; connected by audio waves, delivered up in simple, raw stems that create a wall of sound. Their collaboration is cosmic, with melodies that transcend space and time. This is music as revelation – cerebral liberation and illumination in a snap.

Emotionally, this is an uncompromising project. Hope and Sizaret aim to activate the release of dopamine and hormones in our bodies, chemicals that trigger pleasure, pain, happiness and sadness. As listeners, we can choose to move on or dig into these feelings. There is no right or wrong.

Here at Revel, we caught up with the leftfield demigod himself, Pete Hope, to find out in detail about his highly distinctive creative approach. What drove his interaction with Sizaret, and the avenues they took while experimenting with Hope’s individualistic vocal improvisation?

“Henri started the ball rolling with the first three tracks he sent me,” Hope explains. “[He said] they were pretty much improvised and thought I should approach them in the same way.” This provided a thrilling foundation for Pete to work from, inspiring him with the sheer throbbing life of the early tracks Henri sent over. This is apparent in their final form, with their visceral rawness delivering a sense of unpredictability which can unexpectedly ravage the senses.

Asked him about Henri’s approach, and the rawness of the project, Hope responds: ”When I sent the tracks back to him, I insisted that he didn’t do any unnecessary work beyond what had been created, which he was happy to take on board.”

This stripped approach was new for Sizaret, but proved an inspiring method to work in: “Very little was either added or changed once the vocals had been laid down. So, yes, it’s raw… The project certainly took on a wholly different kind of approach than Henri, who is very clean and precise.”

Formulating words can be a task beset with trial, error and revision, but Hope’s method of approach is laser-focused on producing a sense of immediacy; in harnessing the evanescent and immediate spark of inspiration we attain through sight, sound and touch.

“I did some reactive writings for the NOT NOW tracks,” he explains, “rather than try and write out the lyrics, which were all spontaneously improvised, along with the vocals.” This creative approach breaks Hope free from being trapped in any sophisticated or complex calculations, or endless iterations that eventually blur any sense of impulsiveness. His method is instant, always in flux, and as a result, never stale.

“I made a point of not actually listening to the whole of any track before I started recording, only taking in just enough to get a sense of pitch, pace and mood; find enough words to use as a jump off point, and then go for gold,” he says, clearly showing enthusiasm for this breakneck method of music-making. “One take, all the way through,” he says, and this could encapsulate his distinctive approach.

For Pete, this impromptu method of creation provides the pressure and tension needed to authentically push his own creative boundaries, and tap into the rawness of feeling. His unique interpretation of the core root of the electronic compositions is something sensed, explored, not planned. “Mostly it worked!” he laughs, making light of the considerable efforts he has undertaken to keep his work fresh and vital. “Nothing like a bit of pressure to get the old grey jelly quivering!”

Music, after all, is emotive and transformative. It flourishes through an intuitive sense of feeling, in an attempt to encapsulate authentic expression. Hope also developed another technique to enhance his intuitive writing: “I decided to play the finished tracks, one after the other, no pause, and do a written piece for each track that was triggered by the sound of whichever piece was playing,” he explains.

This was a way of re-exploring the sonic maps of the original recordings without tainting their purity with revisions, while “putting the pressure on to write six separate pieces in real time,” as Hope describes it. These six stream-of-consciousness pieces will be released alongside the digital and physical editions of the music in the near future.

Hope and Sizaret’s highly instinctive collaboration redefines the boundaries of industrial techno, delivering an immediate wealth of human sensation. The wild, unkempt beauty of these tracks has an immediacy, like an unconscious reaction, or a dream that fades away with the first light of dawn. If you wake up wet, you’ll know why…